Morrison Colorado was named for a local stonemason and businessman who was known for building Mt. Vernon and then many local buildings in Morrison as well as supplying stone for Denver buildings in the 1800s.  Also important in Morrison's history was the discovery of dinosaur fossils in the late 1800s.

Morrison was incorporated in 1906 and today the town still has less than 500 residents, though it holds a lot of attractions!

While operated y Denver, Red Rocks is an iconic place for Morrison. The park is full of gorgeous views and the amphitheatre is a favorite among concert goers and performers alike for its beauty and unique sound. Locals love to exercise at Red Rocks too - a jog up the stairs at 6,400 feet can really get your heart racing!

Dinosaurs fossils and tracks were discovered in Morrison in 1877 and discoveries have continued in the area into recent years. Dinosaur Ridge is a place where children and adults can hike and explore, visit a museum and learn about these dinosaurs.

Bandimere was started in 1958 with a drag strip and a dream and is still family owned and operated. They have many races and events. 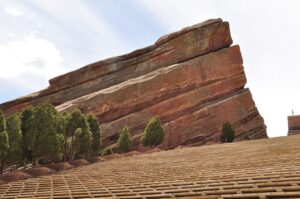 To learn more about connecting and living in Arvada, check out these great resources!