Lakewood had 90,000 residents when the city incorporated in 1969. The area had been around for over 80 years, though, starting with a 13-block area platted along Colfax, West of Denver, connecting Denver to the Rocky Mountains.

Today, Lakewood has over 150,000 residents, and stretches from Sheridan Blvd to CO-470. Notable employers in the area include the government, Einstein Bros Bagels, and Integer.

The Villa Italia mall was, for a short 2 years, the largest mall in the world. In the 1990s, as mall shoppers dwindled, the mall was torn down and replaced by a downtown-like shopping and entertainment area, Belmar. Belmar has several blocks of establishments from restaurants and bars to large department stores and many small boutique stores. It is located at Alameda and Wadsworth BLvd, where you will also find other shopping and dining options surrounding to the West and East.

The Lakewood Cultural Center offers exhibits and classes and the Lakewood Heritage Center has an outdoor museum and indoor gallery, as well as showcasing many historic local buildings.

Another shopping area can be found in West Lakewood, around Colorado Mills, a popular outlet mall surrounded by other shopping and dining and located just off I70 and US 6.

Casa Bonita is a semi-famous local Mexican restaurant, known for its atmosphere and entertainment as well as being featured on a South Park episode.

Lakewood has four rec centers, pools and a 55+ center, as well as over 100 parks and 107 miles of trails. One of the largest parks is Bear Creek Lake Park at over 2600 acres! The park offers residents the chance to hike, picnic, camp, fish, boat, windsurf, mountain or road bike, hit the swim beach or head to the archery range.

There are many neighborhoods in Lakewood with residences from condos and townhomes to single family homes in a wide range of styles and prices. You will find areas with 1950s to 1970s homes, all the way up to brand new homes. Lakewood offers many residents the opportunity to be in the metro area without being in the city center of Denver, and still able to commute to many parts of town with multiple highways and major roads. 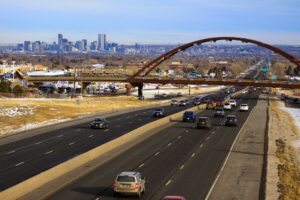 To learn more about connecting and living in Lakewood, check out these great resources!