Around the country, Golden may be known for being the home of Coors, but it's roots were in the Gold Rush. Golden City, as it was first known, served as the capital of the territory for several years, until it was moved to Denver in 1867.

Today, Golden is home to not only Coors Brewing, but the Colorado School of Mines and several institutions and businesses of note. The downtown area is thriving and the town retains its historic charm for its 20,000 residents and numerous tourists.

Downtown Golden is full of history and charm. There are shops, restaurants, craft breweries and more. You can even check out this 1.5 mile walking tour to see some of the city's most notable historic spots. For even more history, you can visit The Golden History Museum & Park, Colorado Railroad Museum, and Buffalo Bill’s Grave!

Colorado is known for is great outdoor activities, and Golden is no different. You can fish, tube or kayak in Clear Creek, hike Triceratops Trail, or explore Lookout Mountain. There's more too! Golden has over 400 acres of open space, as well as 24 miles of interconnected trails, and Golden is surrounded by 8,000 acres of regional open space. See trails and information at Golden's city website.

In Golden, you'll find historic homes in the city and cabins in the foothills. There are residents in city condos, and others with many acres of wooded land. It's a very diverse and popular area, nestled in the foothills West of Denver. While many Golden residents love the amenities right in town, they also love that they are close to both Denver and the mountains. 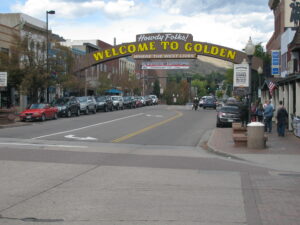 To learn more about connecting and living in Golden, check out these great resources!